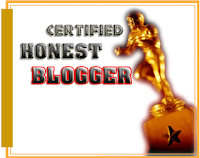 Lalitha of starry nights has identified me as an honest blogger and has awarded me.Thank you Lalitha it is an honor.

These are the rules:
1. The winner can put the logo on their blog
2. Link the person you received your award from
3. Nominate at least 7 other blogs.
4. Put links of those blogs on yours.
5. Leave a message on the blogs you’ve nominated.

The Kid since I've been at the receiving end of his unrelenting honesty and have learnt useful lessons from him. The Kid is my first choice.

Mahadevan for his honest portrayal of people who are so important to society but whom society always takes for granted.

Kurrodu who shows genuine concern for those around him.


My own daughter Priya who doesn't mince her words when she finds something objectionable in my writing.I used to send a copy of anything I wrote to her for her candid opinion.

And of course Usha whose honest revelation of the bloopers committed at her son's wedding sent her readers rolling with laughter.

Ardra whose posts are not so frequent but each one comes straight from the heart.

There are others like joy,monika.rajk,dipali and so many others whose posts come straight from their hearts. i know they would have been already awarded or are likely to be awarded soon.
Posted by Hip Grandma at 5:04 PM 13 comments:

The spice of life

I think I am missing something that had been part of my life till recently. The ‘nok jhok’ with MDH. Those who don’t understand what MDH stands for may quit reading further. This is a ‘Wives only’ post and you may not really appreciate it. You may not be married or even if married your relationship may be as formal as with acquaintances. My mother for one was married and yet not married. I had never heard her rave and rant about my dad’s mood swings, late hours and a hundred other things that husbands are accused of.

Twenty years back my mom was on a visit to our house and she happened to over hear a conversation between my husband and me.

“Pick up some refined oil on your way back from office. “ I said.

“I bought two kgs of it 2 weeks back. What happened to all of it?” I thought or rather I was sure that he stressed on the ‘all’ part of his comment.

“I felt thirsty and drank it up.” Was my reply.

My mother was shocked. I was certainly not the daughter she had raised. But the shock was such that try as she might she could not raise her own voice to scold me. She protested by maintaining an annoying silence. I had to literally coax her to scold me and get her displeasure out of her system. According to her no one spoke to their husbands like that.

“Times have changed and my mother in law actually encouraged me to protest when he was being unfair. Had she been alive she would have taken up for me.” I tried to reason but she refused to relent.

I agree I am just being funny. My husband and I take turns to initiate those small tiffs that add spice to a marriage. One Sunday afternoon I got up from my afternoon nap when he asked for a knife I gave him one.

“Where is the one with a red handle?”

“Why not keep things in their proper place?”

I started looking for it but it had been put to wash in the sink.

“When are you going to learn?”

“Never in this lifetime. Pray for a better life partner in your next birth.” I certainly was not giving in.

I looked for all the knives in the house and tied them up together and put them alongside his set of screw drivers and said
“Pick up the knife of your choice and place it back after use in your toolbox. I am not taking responsibility for any of those. I am getting myself a new set.”

Within an hour the entire set returned to my kitchen. They certainly did not walk back.

While I agree that we quarrel and patch up like children in their pre teens, these little ‘nok jhoks’ have actually helped us bond. He is the one who wakes me up and accompanies me on my morning walk. I beg to be allowed a little more sleep but he treats me like an overgrown schoolgirl and refuses to give in. I try to find excuses to return fast. He insists on a full hours of walking though I am the one with BP and sugar.

However, jokes apart, there is one aspect of married life that leaves me wondering. The mantras recited and repeated during a marriage ceremony clearly state that a wife ought to be considered a ‘sakhi’ or friend and yet Indian women far from being treated as equals are trained to smile even when abused. I have a friend whose husband provides well for her and gives her a lot of freedom. Yet the slightest provocation, not necessarily by his wife, has him hurl abuses at her. He drags her parents and her upbringing into the conversation. She does not say a word in protest and justifies his behavior by saying that he is otherwise good but does not realize what he says when he loses his temper.

“I do point out that his behavior hurts me. He accepts his mistake and apologizes in private. I can’t expect him to do it in public. It would be far too humiliating.” This is her explanation.

Was it not humiliating for her when he insulted her in front of others?

This is an accepted fact. But are they? I may be wrong but I feel society expects them to behave like that just as it expects women to take abuses and insults in their stride.
A girl in our neighborhood rang up a social activist at 11:30 in the night to say that in a fit of uncontrollable rage her husband had beaten up his parents and came chasing after her. She had managed to flee to the terrace and locked the connecting door. He was banging the door asking to be let in. She had the good sense to carry her mobile phone with her. The social worker lived some 10 kilometers from her house. Luckily the DSP had been briefed about her case and when contacted he sent a constable to their house and the situation was brought under control. The husband apologized the next day and the girl was asked not to provoke him when he was angry.

Why is it that we advise our daughters and sisters to be patient? Why not advise our men folk to treat the ladies in their family with respect? While I enjoyed the books by Amy Tan and Khalid Hosseni both the books dealt with violence against women in two Asian countries and left me depressed for days. There are cases of women ill treating their men and sons ill treating their parents. I wonder if the arrangement in Western countries is better.

I started my post in a light note and have ended it on a more serious one. Women education and empowerment was meant to bring about a balance in society. But has it perhaps disturbed it more than balancing it? Is society not yet mature enough to address the social, financial and emotional needs of a woman?
Posted by Hip Grandma at 7:55 PM 30 comments:

A teacher's success ought to be measured not by the results obtained by the bright ones but rather by every little step taken by the weaker ones towards their betterment."

This is what I wrote in my post on Teacher's Day. I am glad to be able to share some good news. I had mentioned Manisha and Madhumita in this post of mine. Today Manisha is a confident young woman and is doing Mass Communication in Pune.She managed a high second class and bugged the life out of her dad to allow her to leave for Pune. Her brothers supported her and the few years she spent with us have indeed boosted her confidence. Madhumita is doing M.Sc in a local college. Her family could not afford to send her out of town. She plans to do B.Ed after her post grad course and with her experience and temperament I am sure she'd make a fine teacher.

I had mentioned about a batch of students in this post of mine. I am glad to say that over 80% of them have got a first division. Three got selected for a BPO job in Gurgaon where they'd get to do part time MBA. Only one of them joined. The other two are doing MBA in the Extension Center of Sikkim Manipal University and others are either preparing for CAT or Bank exams.

I don't take credit for their good performance. It is their success story. If as a department we have been able to motivate these students we have every reason to celebrate Teacher's Day.

A teacher should not only teach which she/he would do anyway. A teacher should be instrumental in preparing her/his student to meet life's challenges. I attended the orientation meeting at my son's school following his KG admission and was impressed by an anecdote narrated by the Vice Principal. It is something like this.

A mother told her child's teacher that now that her son had joined a regular school she had to start teaching him.

"Hurry up" the teacher said "you are already late. A child starts learning from the day he/she is born."

How very true! A teacher is paid to teach but each one of us whether parents or not are being watched, analyzed and observed by these little ones. Don't be surprised if they take it on themselves to teach you a lesson or two.

Usha has a way of placing high hopes on me and has decided to give me the "Brilliant Weblog Award". this is given to sites and blogs that are smart and brilliant both in their content and their design. I feel puffed up and let me tell you that I've gained 2 kgs by weight and 4" by height at least in my mind. Alas if only the height part had been possible!!

1. When you receive the prize you must write a post showing it,together with the name of who has given it to you, and link them back

2. Choose a minimum of 7 blogs (or even more) that you find brilliant in their content or design.

3. Show their names and links and leave them a comment informing they were prized with ‘Brilliant Weblog’

4. Show a picture of those who awarded you and those you give the prize
(optional). 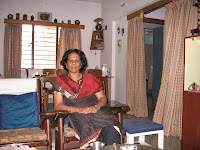 Now I need to pass this award to bloggers of my choice who I consider brilliant.

So I pass on this award to-

1. Tys on ice who makes his readers laugh first and think later.

2. Madhumita for being the brilliant wife who takes on Tys.

3. Vishesh for the lovely poetry he writes.

4. Renu who can switch topics and make each one interesting.

5. Alapana for simply being herself-self assured and matured with a brilliant taste for music.

6. Srijith who made me change my opinion on men being an insensitive lot.

7. Finally Lalitha of starry nights whose posts never cease to amaze me.

These are bloggers who have bonded with me like family.There are others too and each of them have impressed for the brilliance of their posts. Some have already been awarded and the rest are bound to be identified soon.
Posted by Hip Grandma at 7:12 PM 14 comments: